(Newburyport News, April 27, 2012) Newburyport will host its first Jewish Film Festival next week with a screening of four topical and thought-provoking documentaries, as well as a movie classic. The festival will run Thursday, May 3, through Sunday, May 6, and is being sponsored by Congregation Ahavas Achim, North Shore Teen Initiative and Camp Menorah.

"Circumcise Me," about a Catholic convert to Judaism, will be the feature film on Saturday, May 5, at 8:45 p.m. at Congregation Ahavas Achim. The film features Yisrael Campbell, who has become a stand-up comedy star in Israel. Campbell's routine riffs on the fact that he converted to Judaism three times, once reform, once conservative and once orthodox.


"Is it hot in here, or am I the only one dressed for Poland in the 17th century?" Yisrael Campbell looks more like a rabbi than a comedian, but don't be fooled by the big black hat, frock coat and Hasidic side-curls. Born Chris Campbell, the son of an ex-nun and a Catholic schoolteacher, he converted to Judaism not once, but three times - Reform, Conservative and Orthodox. His spiritual journey began as a drug-drenched teenager in Philadelphia and ended in Jerusalem among the suicide bombs of the Palestinian intifada. So what's to laugh about? It's the way he tells it. CIRCUMCISE ME is a hilarious, searching and moving story of one man's quest for spiritual enlightenment against the bewildering backdrop of the Israeli-Palestinian conflict. 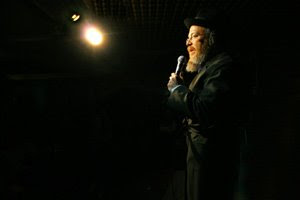 ‘Circumcise Me’. That’s the name of the debut movie by Jerusalem-based news reporter and film director Matthew Kalman.

Mr Kalman, 48, teamed up with photographer David Blumenfeld to co-direct the hit comedy. Circumcise Me: The Comedy of Yisrael Campbell traces the life of Catholic boy-turned-Jewish comedian Yisrael Campbell, whose story turns out to be one of wild self-discovery.

Mr Campbell — formerly known as Chris Campbell — undergoes three conversions: from Catholicism to Reform Judaism, to Conservative Judaism and then to Orthodox Judaism.

The film, which has been generating a lot of interest at film festivals across Canada and the US, has now arrived in the UK.

Mr Kalman, who made aliyah ten years ago, tells People: “During the intifada, I spent a lot of time reporting on and filming people getting blown up. People were generally interested in blood and guts and it was all very depressing. David and I decided we wanted to do something more fun. I went to see Yisrael perform and knew we had our subject.”

They started working on the film in 2005. It took three years to complete. “It was a really long process,” says Mr Kalman, who reports for Channel 4 in the UK, among other media. “I am a news reporter but have always been interested in comedy. I thought making a film would be easy. I was wrong.”

Nonetheless, Mr Kalman is pleased with the outcome. “There is a Life of Brian-type feel to the film,” he says. “It is a really funny, feelgood creation. It’s about the intifada but it’s also about how life is lived in Israel. As journalists here, we often have to cover deaths — but we wanted to capture that absurdist humour.”
No comments:

The main feature of Wednesday night was “Circumcise Me,” a documentary chronicling the conversion of a Hassidic Jew stand-up comedian. Yisrael Campbell didn’t always have a four-corner beard, a Jerusalem address, and a Hebrew name. He was born Chris Campbell, a Philadelphia native and Catholic son of an ex-nun. Campbell is surprisingly hilarious for someone that looks like they should be teaching the Torah in a community center not telling jokes in a bar. It’s his transformation that is precisely the reason why “Circumcise Me” is so enthralling.

Campbell was once an outsider looking in, much like many in the audience who attended the screening Wednesday night. He approached the Jewish faith with the skepticism of someone who had never taken religion seriously, and that is the source of most of his comedy.

However, between the jokes is something more profound. Campbell’s fascination with the religion lies in his conversion pledge of “casting his lot in with the Jewish people,” and most of the movie is spent exploring this idea. Even as a convert, Yisrael is accepted into a tight-knit Jewish community after moving to Israel, and as Campbell suggests, it’s this binding sense of community that allows Jews to prevail in dire situations.

Campbell doesn’t waste words with his to-the-point approach and the film is short because of it, but it is also what makes the film work. The documentary style introduces us to the major players in Campbell’s life and gets the audience invested in his relatable story of a man looking for answers from something greater. He doesn’t need a somber recreation of a Holocaust story to show the great resilience and faith of the Jewish people, and that makes the film’s presentation that much more refreshing.
No comments:
Older Posts Home
Subscribe to: Posts (Atom)

Circumcise Me has now screened at more than 50 festivals and events across the US, Canada, UK and Australia. See "Upcoming Screenings" to see when the film will be in your town, or contact us to book the movie for a festival or local event: matthewkalman@gmail.com